Celebrating 25 Years of The Women’s Fund at POP

Vicki Saunders is an entrepreneur, award-winning mentor, advisor to the next generation of change makers and leading advocate for entrepreneurship as a way of creating positive transformation in the world. Vicki is the Founder of SheEO and #radical generosity a global initiative to radically transform how we support, finance and celebrate female entrepreneurs.

This year’s honorary chair is Ruth Ann Harnisch. Ruth Ann is an entrepreneurial force with The Harnisch Foundation and a founder and guiding light of both The Women’s Fund and The Power of the Purse®. 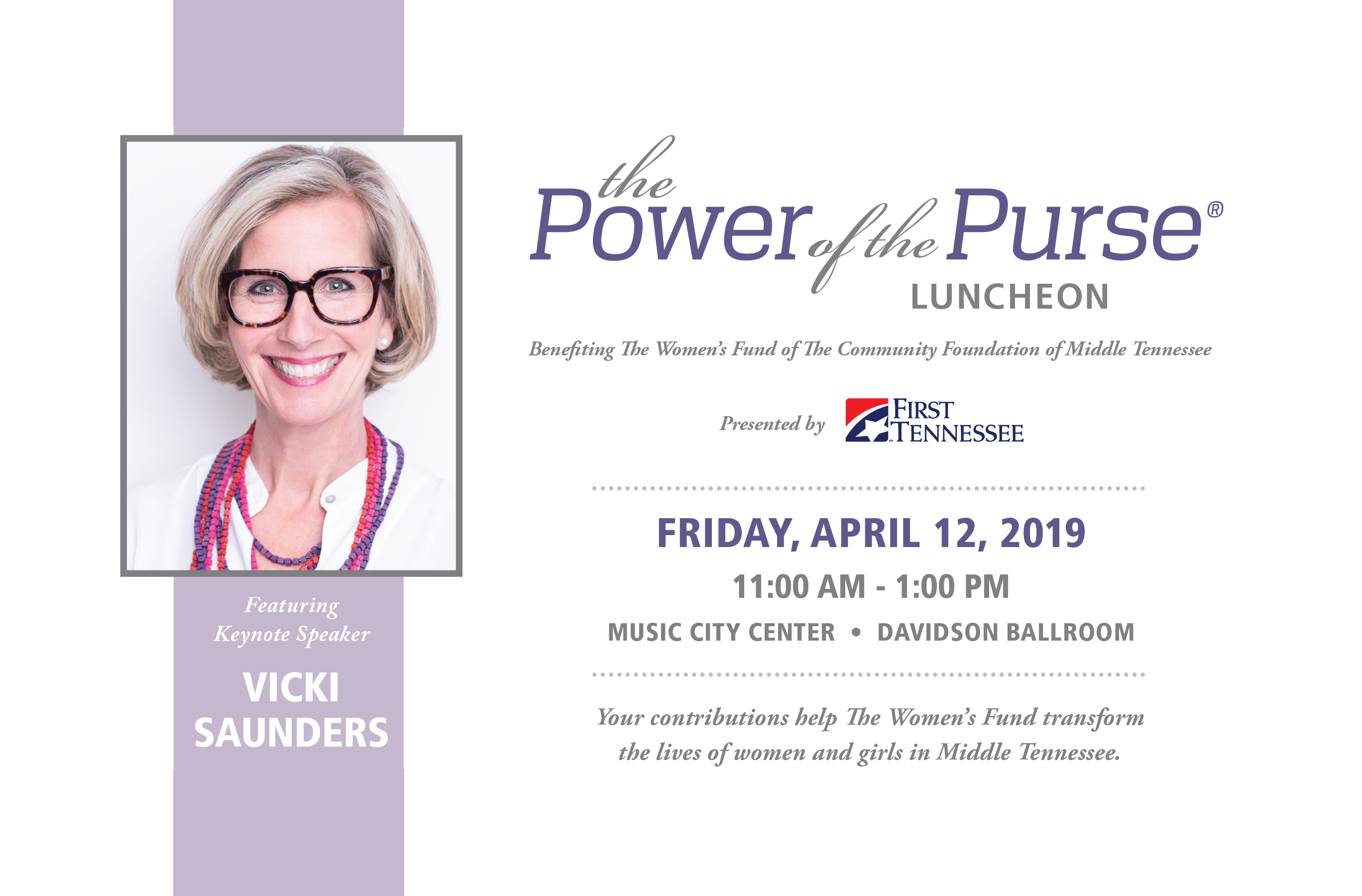 What a difference 25 years can make.

25 years ago a small group of women along with two enlightened men founded The Women’s Fund within The Community Foundation of Middle Tennessee to level the charitable playing field and to ensure that there would ALWAYS be money to support women and girls in Middle Tennessee who were in need.

Afterall, we didn’t love our sons more than our daughters, but we did support the Boy Scouts at a whole different level than we did the Girl Scouts; we supported the YMCA to a different degree than the YWCA, etc.

The Women’s Fund came to start the process of filling the gap, for perpetuity.

There were naysayers 25 years ago. A few asked why there wasn’t a Men’s Fund.  A woman who had grown up in Nashville decided to make a founding gift but she was sure that the South had not yet changed its stripes and the effort was for naught.  Others who supported the effort still were uncertain about whether Women’s Funds weren’t meant to be only on the West or East coast. And, we spent a lot of time assuring women that they would not need to “burn their bra” to become part of the effort.

This was an age where many bright and intelligent women believed that the income earned belonged to their husbands rather than to them both. Where the term “pin money” was still used.

Where when hospitals needed caps for newborns, the women set to work knitting while the men thought about how to buy a knitting machine.

It was a time of dispelling the myths and focusing on investing in the lives and well-being of Middle Tennessee’s women and girls.

There wasn’t much on TV at that time, but there was an advertisement for women’s right to smoke that said: “We’ve come a long way baby. …”

Today 25 years later … there is still much more to be done.

But we have – thanks to everyone here today and those that have come before – made incredible strides.

Thanks to generous volunteer support and investment, The Women’s Fund has – since 1995 – been awarding grants to programs addressing: economic self-sufficiency for women; prevention of violence against women and girls; and the promotion of health and wellness of women and girls.

Under the leadership of Barbara Chazen, our first chair, we humbly began our grantmaking with $4,000 that we used to make eight $500 grants.  We were SO excited!!!!

That has been made possible by hundreds of donors who have given graciously and generously to make the path easier for our neighbors in need. These have been led by women like Jane Eskind, Ruth Ann Harnisch and Janet Ayers who have contributed or committed to million dollar gifts.

And then there have been the events – especially the Power of the Purse® – and initiatives and informational gatherings like out Forums that have helped create more money for grants and have heightened our individual and collective understanding of the needs of women and girls in our community.

It is with great enthusiasm that we celebrate the past, present and future of our work and those we serve.  We look forward to continuing the work, supporting those in need, and finding gaps that we can fill.

One example is the creation, in 2017, of the Girls Give initiative which plans to introduce and inculcate the love of philanthropy at any level and the joy of giving to causes that matter as much to the donor as to the recipient.

Another is Women Will, which exists to make is comfortable, convenient and cost-effective for women to create a legacy by making gifts of real estate, real property (otherwise known as “stuff”), insurance plans and bequests. Rather than turning over our beloved possessions to a yard sale or to our children who may not think it their cup of tea, gifts to the Women’s Fund and/or The Community Foundation can live on to do good deeds and continue to support this place we all call home.

Though we celebrate The Women’s Fund’s Silver Anniversary, when it comes to charitable giving, programs serving women and girls still often remain shortchanged. But we are proud to continue our work to make the path easier for those who will one day stand on the shoulders of those who have come before them, championing progress and pushing ever forward to new heights.

Our legacy for our daughters and grandaughters will be the ability to follow in the footsteps of those who have come before them, navigating the paths of service and Connecting Generosity with Need® .

Learn More About The Women's Fund