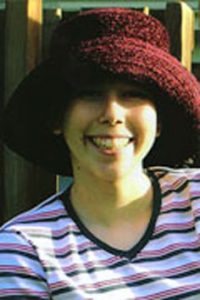 Eligibility: Applicants must be graduating seniors from the Middle Tennessee area, with preference given to seniors from Clarksville-Montgomery County Schools, who have survived cancer at some point in their lives and who have either a GPA of 3.0 or a score of 21 or better on the ACT. Verification of cancer diagnosis and/or treatment will be required.

Catie Summers was a daughter, a sister, a friend and a cancer warrior. She was born at Scott Air Force Base, Illinois, on July 3, 1991, and grew up in Clarksville, Tennessee. Catie loved school, played softball, and was a black belt in karate. In April of 2004, at age of 12, she was diagnosed with a rare type of osteosarcoma, a bone cancer. While undergoing cancer chemotherapy and multiple surgeries, she maintained straight A’s in middle school and high school and was twice named to the Mid-State Band as a baritone player. The Clarksville High School HOPE Club raised money in her name through sales of ‘Viva Catie’ bracelets and donated the proceeds to the Lance Armstrong Foundation. Because of their efforts, she was able to ride alongside fellow cancer survivor Lance Armstrong at the 2005 Ride for the Roses. A few months later, the cancer metastasized to her spine, eventually paralyzing her. Catie fought valiantly to the end, dying at home on December 16, 2007. She touched the lives of many people with her humor and courage. To honor her love of learning, her family established this Scholarship for a graduating senior in Middle Tennessee with preference for the Clarksville-Montgomery County School System who has also battled cancer. Viva Catie!