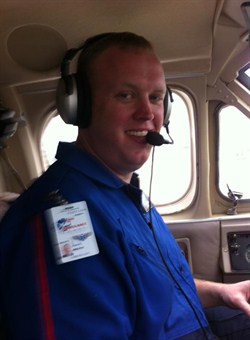 Eligibility: Students at MTSU in their junior or senior year with a 3.0 gpa or higher who are majoring in aerospace with a goal of becoming a pilot.

Anyone who knew Cameron would describe him as a rock, a gentle giant. With a smile that could light up any room, Cam truly had the gift of joy; he loved life and all it had to offer. During his 31 years, he was a beloved member of his family, a loyal friend, a world traveler, and an adventurer. In the fifth grade, Cam declared he’d be a pilot when he grew up and actually followed that dream, graduating from Middle Tennessee State University with a BS in Aerospace Administration/Professional Pilot Emphasis, and holding a successful career as a pilot. Notably, Cameron served as President of the Moosemen Rugby Club at MTSU, where his rugby teammates became his lifelong brothers. The Cameron Blake Parnell Memorial Scholarship Fund has been established by his family and friends in order to share Cam’s spirit and legacy.