If patience is a virtue, as the proverbial saying goes, you will seldom find a person more virtuous than Demetrius Wide.

It has been nearly two years since a tornado destroyed her modest North Nashville home, the one her daddy left her, shaking it off its foundation, ripping through walls and sheering off half the roof, a tree falling where just moments earlier her grown daughter’s head had rested on a pillow.

A pile of lumber outside a condominium construction site a block down the street had been plucked skyward and contents dumped in her front yard. Her storage shed had vanished. Her truck was demolished.

A washing machine was sitting in her backyard. It wasn’t hers.

“I’ll tell you what a tornado sounds like,’ Demetrius recalls. “It sounds like an airplane and a train coming at the same time.”

In the pitch black, she ventured outside the then-duplex with her husband, daughter and granddaughter. The electricity had been knocked out. People, and dust were everywhere. News media cameras provided light to see.

“Then we got together, and we prayed,” Demetrius says. “We started saying, ’Thank you, Lord. …’

“It’s a blessing that we survived.”

Just shy of two years ago to the date, March 3, we’re sitting on metal folding chairs brought by her caseworker, an angel on earth named Marie King. We shiver in the midmorning chill this late-February morning, beneath us a bare concrete floor poured just weeks earlier.

Demetrius and her family remain ever-so-thankful they survived the tornado as well as the human vultures who arrived shortly afterward: looters hauling off goods from nearby stricken businesses; rogue contractors preying on the unfortunate; fly-by-night realtors offering to buy her home; a do-gooder neighborhood group that promised longer-term help but failed to follow up.

She says she spent about $15,000 to tear down the remainder of the house and to have the debris hauled away. She found out later she could have had it done at no cost to herself.

Someone in the neighborhood passed out signs that read: I AM NOT SELLING MY PROPERTY. Demetrius Wide planted one in her front yard. 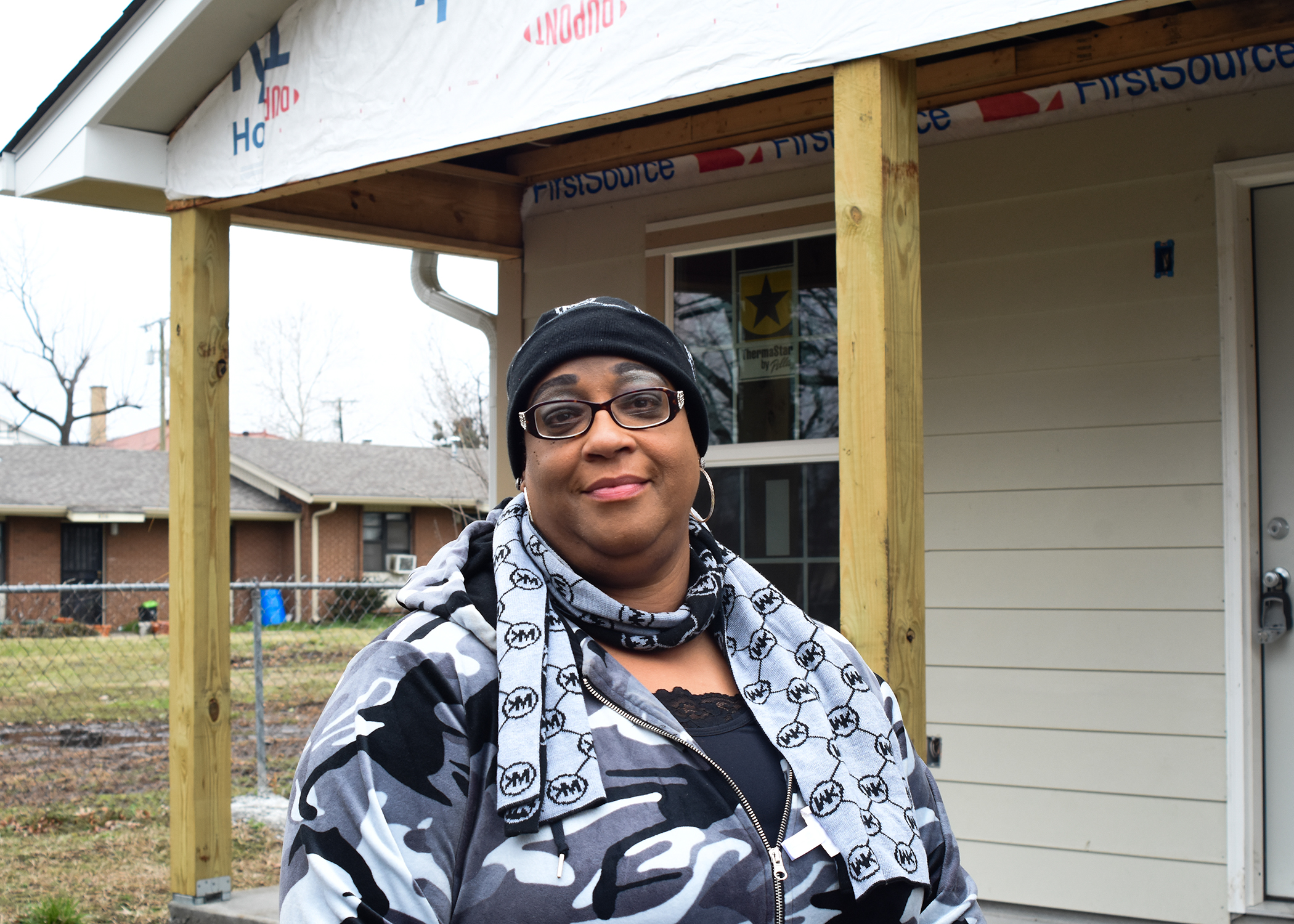 Demetrius Wide can’t wait to move into her home in North Nashville that was demolished by the March 2020 tornadoes.

It was not until Demetrius received two separate calls from the Disaster Recovery Connection, a help hotline in partnership with UMCOR and employees of the Tennessee-Western Kentucky Conference of The United Methodist Church, did the process of rebuilding her home finally begin.

Demetrius first turned down assistance. The case temporarily was closed. “I later reached out to our Davidson County clients who were homeowners, active and former, to let them know of assistance being provided for property taxes,” recalls Marie, with Demetrius being one of those calls. “It was not until this call that we were able to begin conversation about rebuilding her home.”

Demetrius then was connected to Westminster Home Connection, the longtime Nashville nonprofit that has led Davidson and Wilson counties in the rebuild and repair construction in the two years since the tornadoes.

Fast forward to the winter of 2021-22. We’re all sick and tired of Mother Nature’s behavior at this point, weary and anxious and just plain jumpy.

“Two years out from the March 2020 tornados and still, Tennesseans hold their collective breath with every unusual rise in temperature, drop of rain, gray cloud, or gust of wind,” says Heather Marriott, Disaster Case Manager for the Tennessee-Western Kentucky United Methodist Church and UMCOR.

“Survivors are still trying to survive,” she continues. “Those who are still recovering are praying they can recover from the last disaster before they are struck by another. Those who have already recovered are back in a disaster mindset with every weather report.”

Says Demetrius, “Even now, when a strong wind blows, we all panic.”

Her house finally was framed not long ago, with the help of more than a dozen volunteers.

It will be at least this April before Demetrius and family are expected to be allowed to finally move back into what is now a single-family home. That’s OK. They’ve waited this long. What’s a few more months?

She and her family have been living in suburban LaVergne since the tornado. She had learned the day after Christmas, this past December 26, that general contractor Terry Gilley and Bill Carr, disaster relief coordinator with the United Methodist Church’s Purchase District, were ready to begin rebuilding the house.

Each year, Carr recruits volunteers from near and far to work on a Project Christmas House project from the last week of the year.

“It’s a reminder that recovery lasts long after the cameras have left and other disasters are in the spotlight,” Carr wrote in a Facebook posting for volunteers for the project.

This would be a Christmas House, too.

“I was so happy,” Demetrius recalls, beaming. “I’ve got trouble with my knees, right? But when they told me in the front yard, that they were going to get started, I just took off running. …

“Then I praised God. I couldn’t believe it … I was so overwhelmed,” she says. “I felt no pain. I had to pinch myself so I knew I wasn’t dreaming.

“I had met so many crooked folks. Then you get a blessing …”

A Nashville native and Maplewood High graduate, Demetrius, age 59 and now retired, had left her job in Memphis at the nonprofit Youth Villages to return to her hometown a few years ago to take care of her father, James “Mr. T” Taylor. Her father was a neighborhood favorite, always smiling, a peddler of herbs and essential oils who for years had owned the North Nashville house as well as two other properties on the block. He died of cancer two years later.

Demetrius’ precocious 4-year-old granddaughter, Annalise Hammond, flits around and about the unfinished house. Her grandmother had cradled her in her arms while the high winds howled all around them in the dead of night on March 3, 2020. She remains petrified whenever the winds pick up, or the rain empties from dark clouds, fretting that another tornado is going to get them.

“Do you remember the tornado, Annalise?”

“Yes — The tornado knocked our house over,” she quickly replies. “I lost all my toys. … I lost my baby bed, too.”

Annalise has chosen her new room. It’s in the front of the house, with a window through which she fully expects to feed her visiting friends.

She insists that her room be painted pink, her favorite color. 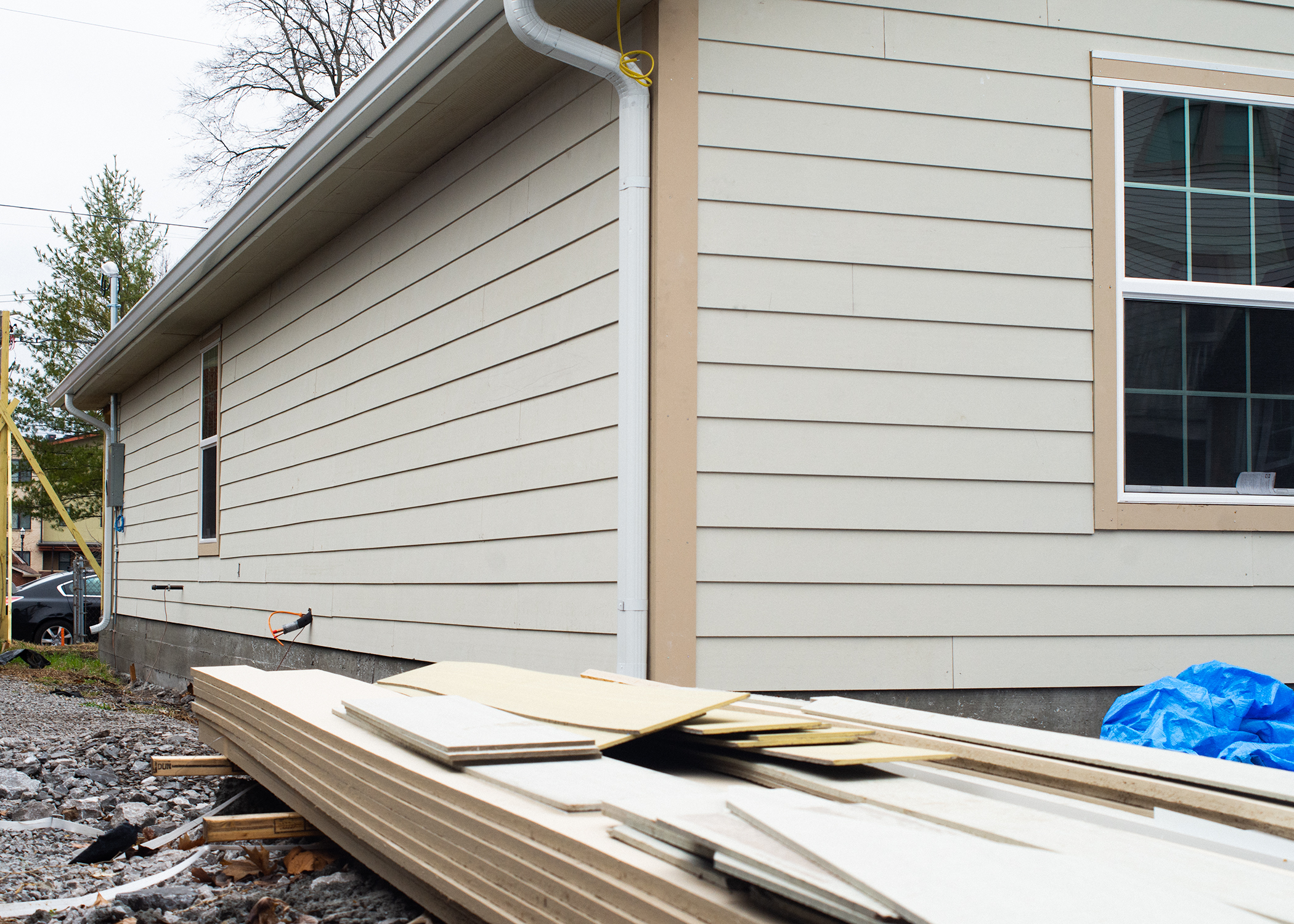 Meanwhile, her grandmother’s heart, despite all the trials and tribulations of the past few years — her father’s death, then the tornado, then the COVID-19 pandemic that claimed the life of her mother — remains as full as her cellphone, which is filled with photos of the devastation in the neighborhood, just north of Jefferson Street.

Uprooted trees. Businesses flattened. Many have been repaired. Still, a handful of other homeowners are waiting for their relief-filled return.

Keith Branson, executive director of Westminster Home Connection, says the organization has worked with more than 60 homeowners at one time or another since the March 2020 tornadoes. Construction is complete for nearly all of them.

As of the two-year mark, 10 homes remain in the building process.

“Most of the remaining homes had massive damage, but are close to being finished,” Branson says. “It takes a long time for the community to recover from a disaster, and the Long-Term Recovery groups are here to make sure no one is forgotten.”

Demetrius Wide, who knows now she and her family definitely were not forgotten, wrote her name in the wet concrete of the foundation when it was first poured. This will be her home again, finally. And her house, the one the father she cared for in the last years of his life, Mr. T, left her.

Below her name, as the wet concrete began to set, she also wrote, “I love you, Daddy.”

Story by Pat Embry and photos by Morgan Yingling, The Community Foundation of Middle Tennessee