Five years in the making, the first comprehensive exhibit featuring the work of the ambitious journalistic initiative called “We Are Nashville™” officially launches on Saturday, May 7.

The multimedia undertaking includes the website We Are Nashville™, public displays, a series of films, intimate photos, journal entries podcasts, and the subcategory “House Rules,” all designed to objectively reflect the sights, sounds and spirit of the city as it exists today. This one-of-a-kind initiative will be celebrated with an immersive gallery show opening from 5-8:30 pm Saturday, May 7 and running for the next three months at Chauvet Arts gallery, 215 Rep. John Lewis Way North.

Administered by The Community Foundation of Middle Tennessee, the We Are Nashville Fund supports We Are Nashville™, a multiyear exploration of the New Nashville designed to foster understanding of who we are, inspire conversations that help us get to know one another, and take simple but meaningful actions that preserve the special character of our city.

It was created to introduce the people of Nashville to each other. Its intent is to provide a snapshot of life as it actually and realistically exists in our city: the good, the bad, the rich, the poor, those who have grown up here, and those who have relocated here from foreign lands. 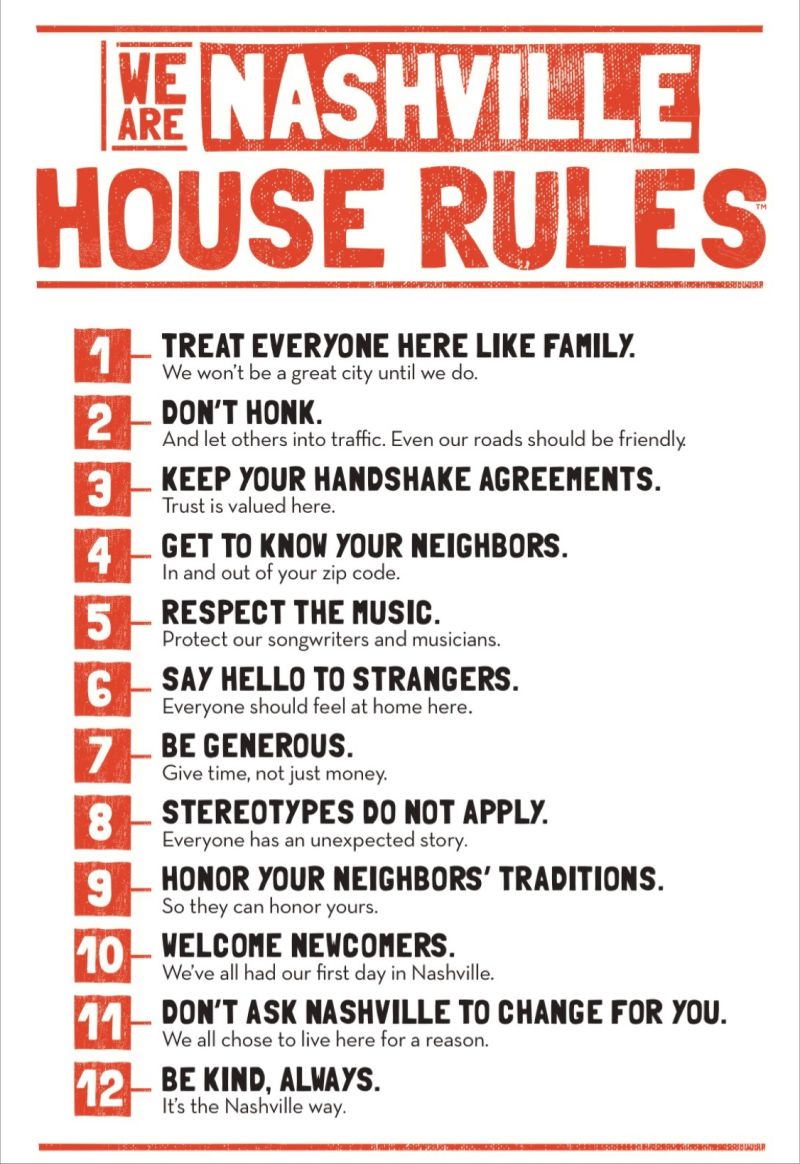 Fearing that not everyone in Nashville was benefiting from Nashville’s growth, rising self-esteem and affluence in recent years, the late philanthropist and business leader Ben Rechter hoped to inspire the city to “take care of its own” and treat each other like family. But to do so, said Rechter, a founder of The Community Foundation and its former board chair, said, “We have to know each other first.”

Rechter’s vision was brought to life in collaboration with Kerry Graham, a local businessman and CFMT board member and former board, chair and fellow businessman Don Transeth, who contracted international photojournalist Philip Holsinger to take a hard look at the city.

In using a non-native journalist, the goal was to help the city see itself objectively, and then to empower residents to make the choice to preserve the city’s unique character.

Holsinger took a hands-on approach to the assignment by embedding himself full-time in various local communities over the past five years.

For nearly 50 years, Rechter was known for his dedication to the Nashville community. Besides The Community Foundation, some of the organizations and projects he supported included Fisk University, United Way of Greater Nashville, Nashville Symphony, Nashville Public Television, and the National Museum of African American Music.

Before the We Are Nashville™ project, Holsinger lived and worked around the world recording the intimate lives of people and nations. His work has been featured on CNN and “NBC Nightly News” and in The New York Times and National Geographic. He has lived with Buddhist monks in Thailand, rebel soldiers in the jungle of Nicaragua, the warlords in Cité Soleil, Haiti, and nomadic shepherds in the former Soviet Republic of Georgia.

Holsinger moved to Nashville to document the city’s story and has since made Music City his permanent home.

By exploring various perspectives of Nashville — from a professional guitar player and a former gang leader to the owner of a popular hot chicken restaurant and the leader of the Kurdish community — “We Are Nashville™” provides an unprecedented journalistic snapshot of a city and its people. The vast collection of more than 160 authentic stories and a wide variety of themes are left to the viewer to interpret.

“Initially, I thought this was an effort of journalism so ambitious as to be almost reckless,” Holsinger said. “But I was intrigued with the purpose. We were asked to discover the character of a city — something few have ever attempted — to help the city know itself and to foster and inspire the protection of the city’s unique character. How often does a journalist get to do that?”

“This was so important to my father, and after his passing, we were determined to move forward and to see the project reach its goal of changing people’s behavior here in Nashville,” said Jennifer Rechter Paisley, Ben’s daughter.

“He always said the project is a family portrait of a family that’s grown too big to know each other,” she continued. “It’s designed to help each of us finally see and meet others outside our usual zip codes — helping Nashville reach its full potential.”

To date hundreds of Nashville residents have been interviewed for the project. Key participants and advocates include:

SUPPORT WE ARE NASHVILLE™ PROJECT

The Community Foundation exists to promote and facilitate giving in the 40 counties of Middle Tennessee and beyond. It does this by accepting gifts of any size from anyone at any time and by empowering individuals, families, companies, nonprofits, and communities to respond to needs and opportunities that matter. The Community Foundation works with people who have great hearts, whether or not they have great wealth, to craft solutions that reflect the intentions and goals of their charitable endeavors. For more information, call 615-321-4939 or visit www.cfmt.org.