The Community Foundation of Middle Tennessee could not have been more excited to present the long-awaited 27th annual Joe Kraft Humanitarian Award to Susan and Luke Simons — business, civic and community leaders known for their generous philanthropy in the arts and health care and for their tireless service with numerous nonprofit organizations in Nashville and beyond.

President and CEO of Nashville Electric Service and CFMT’s Board Chairman, Decosta Jenkins presented Luke and Susan with the award.

The Joe Kraft Humanitarian Award was created to perpetuate the memory of a remarkable person who led our community by strength of character and unwavering integrity. The award is given annually to individuals who, like Joe, have made life better for others through hard work, bold dedication to service, and strong faith in the human spirit.

A native of Charleston, S.C., W. Lucas “Luke” Simons serves on the CEO Council of Council Capital and is a former Co-Managing Partner at Nashville-based investment banking and brokerage firm J.C. Bradford & Co. He earned his bachelor’s degree in industrial management at Georgia Institute of Technology and his MBA at the University of Virginia. He has served on numerous nonprofit boards and is a graduate of Leadership Nashville.

Nashville native Susan Willingham Simons earned her bachelor’s degree from Wellesley College. Under the administration of Tennessee Gov. Lamar Alexander, she served in posts that included Commissioner of the General Services Department and Chairman of the Alcoholic Beverage Commission. Susan is a graduate of Leadership Nashville and has served on numerous nonprofit boards, including The Community Foundation of Middle Tennessee, where she is past board Chair as well as a longtime member of the Building Committee. 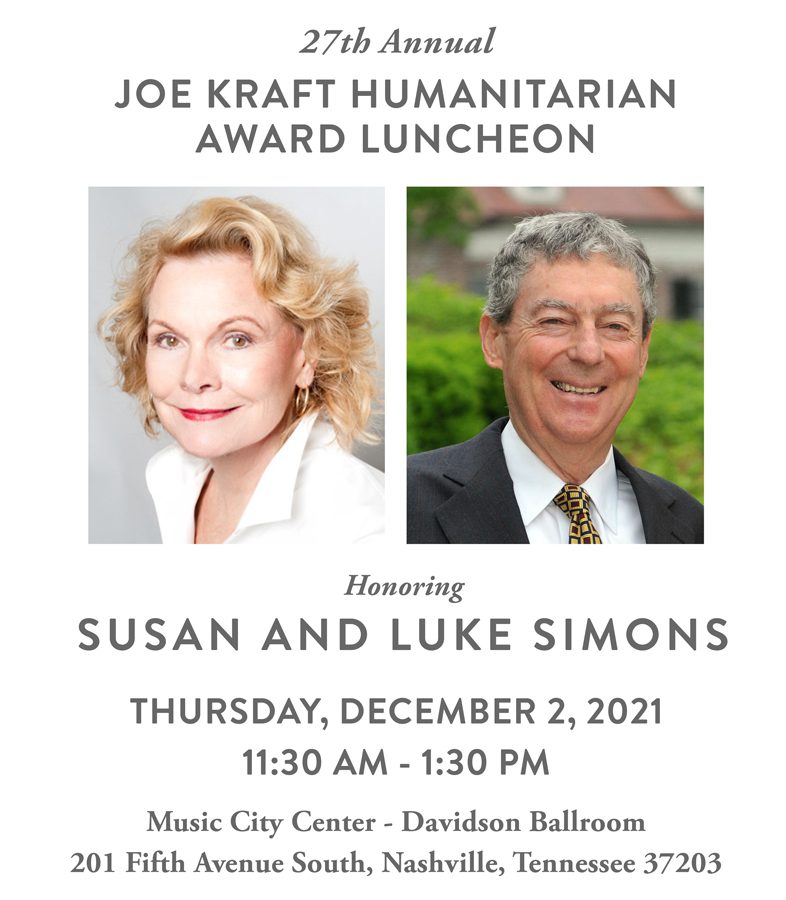 The Community Foundation exists to promote and facilitate giving in the 40 counties of Middle Tennessee and beyond. It does this by accepting gifts of any size from anyone at any time and by empowering individuals, families, companies, nonprofits,  and communities to respond to needs and opportunities that matter. The Community Foundation works with people who have great hearts, whether or not they have great wealth, to craft solutions that reflect the intentions and goals of their charitable endeavors. For more information, call 615-321-4939 or visit www.cfmt.org.