Pictured above: The back of a T-shirt worn by Rex Miller, construction project leader for Brethren Disaster Ministries, appropriately summarizes the relief and recovery efforts in the Waverly area.

WAVERLY, Tenn. — In times of disaster, religious institutions become the relief and recovery hubs of communities, particularly in small towns.

Doing this type of God’s work — serving as a place of shelter and sustenance and a distribution point for life’s necessities — means long hours from dedicated staffers and volunteers, the repurposing of buildings, and the collaboration between nonprofits, neighborhood organizations and government entities at the federal, state and local level.

Such is the case in Waverly, Tennessee, a town of about 4,300 people located about an hour west of Nashville, as the town prepares for the one-year anniversary of a devastating and deadly flood on August 21, 2021 in Waverly and other parts of Humphreys, Dickson, Houston and Hickman counties.

Because of flash flooding from record rainfall, roads quickly became impassible and hundreds of homes and businesses suffered damage, officials reported, as gushing water swept people away and left others stranded on trees, in attics and on rooftops. More than 250 structures were completely destroyed, including the elementary and junior high schools. The National Weather Service said nearly 17 inches of rain fell in 24 hours in nearby McEwen, a 24-hour total precipitation record for the state of Tennessee.

The event resulted in 22 fatalities in Waverly — including 7-month-old twins torn from their father’s arms in the raging floodwaters — with another fatality in nearby Hurricane Mills, site of tourist attraction and campground Loretta Lynn Ranch.

It’s regarded as one of the worst natural disasters in state history.

The Community Foundation of Middle Tennessee soon activated the Tennessee Emergency Response Fund to help those impacted by the flood. Working with the United Way of Humphreys County and many others, including churches from both inside and outside the county, CFMT remains an active grantmaker, with more than $3 million in grants made to date ($3,008,038.79) from $3,371,751.12 raised. 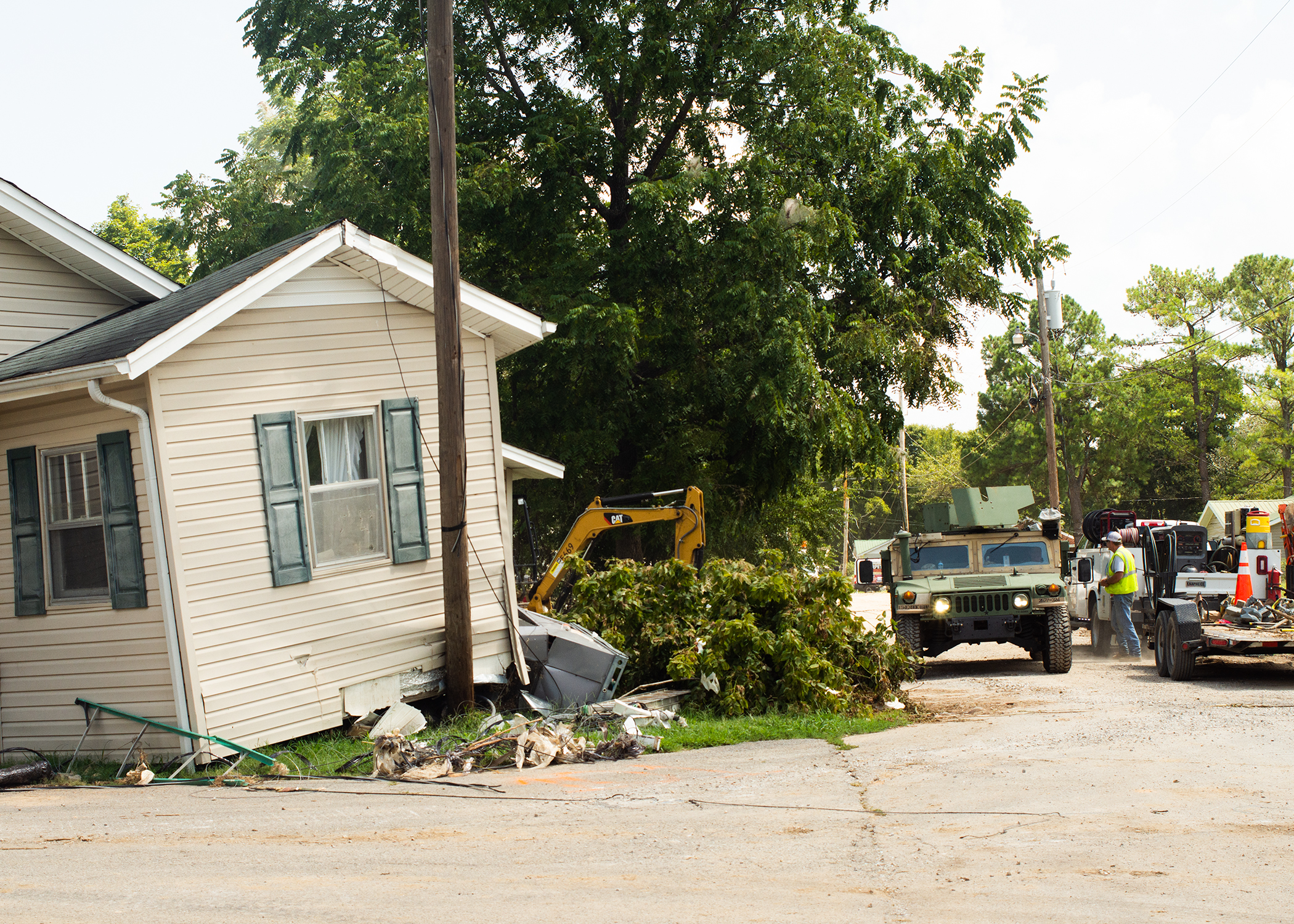 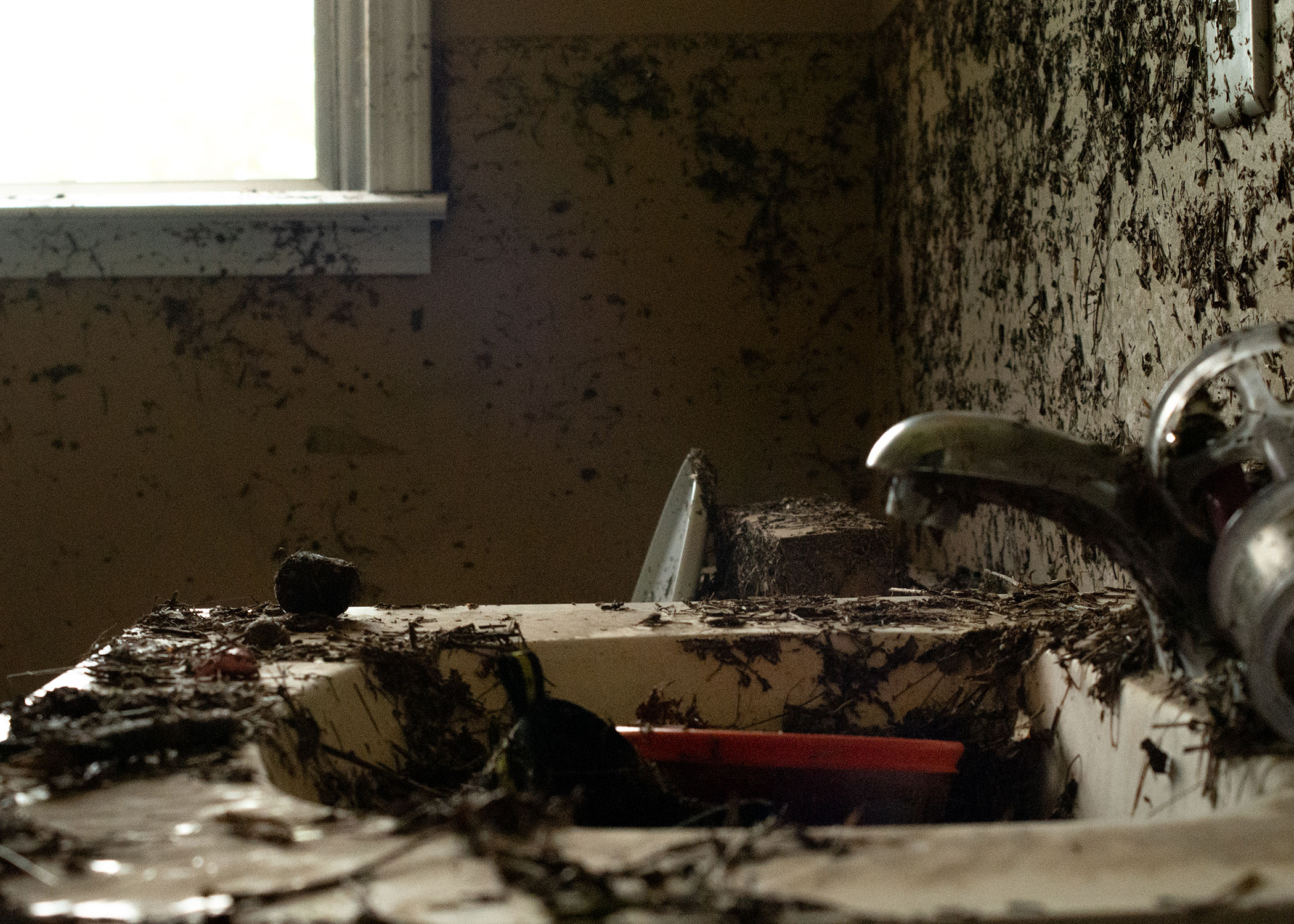 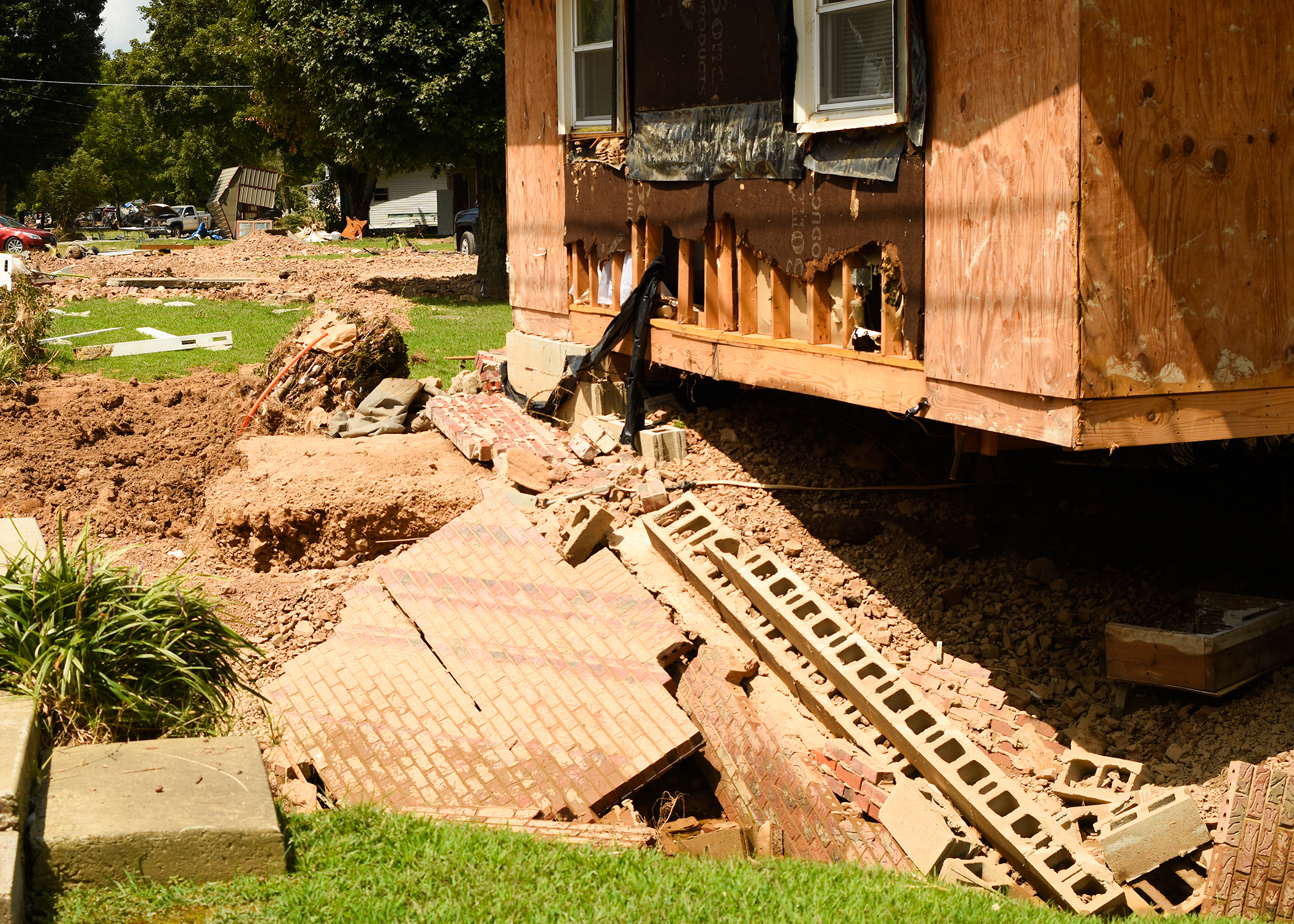 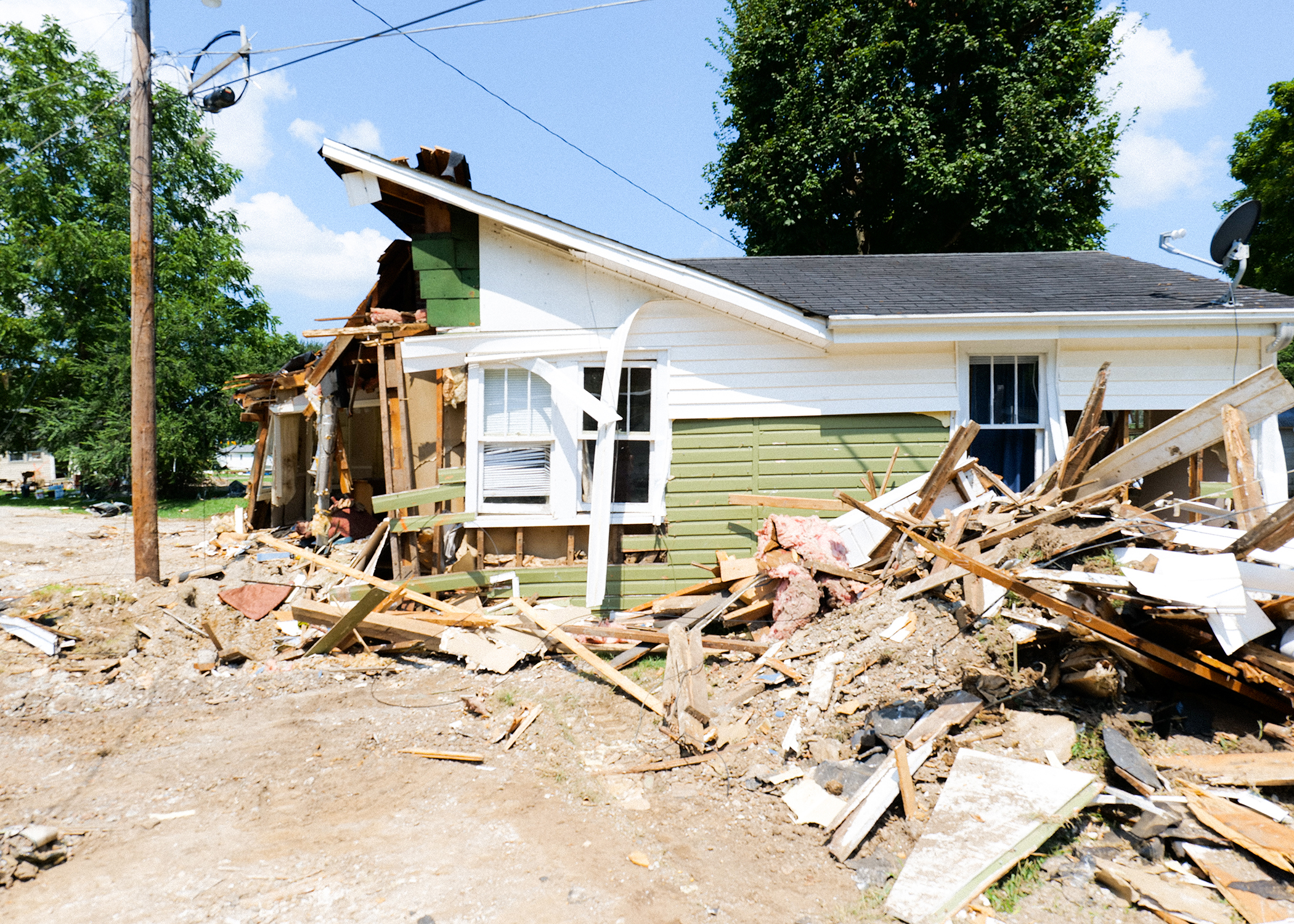 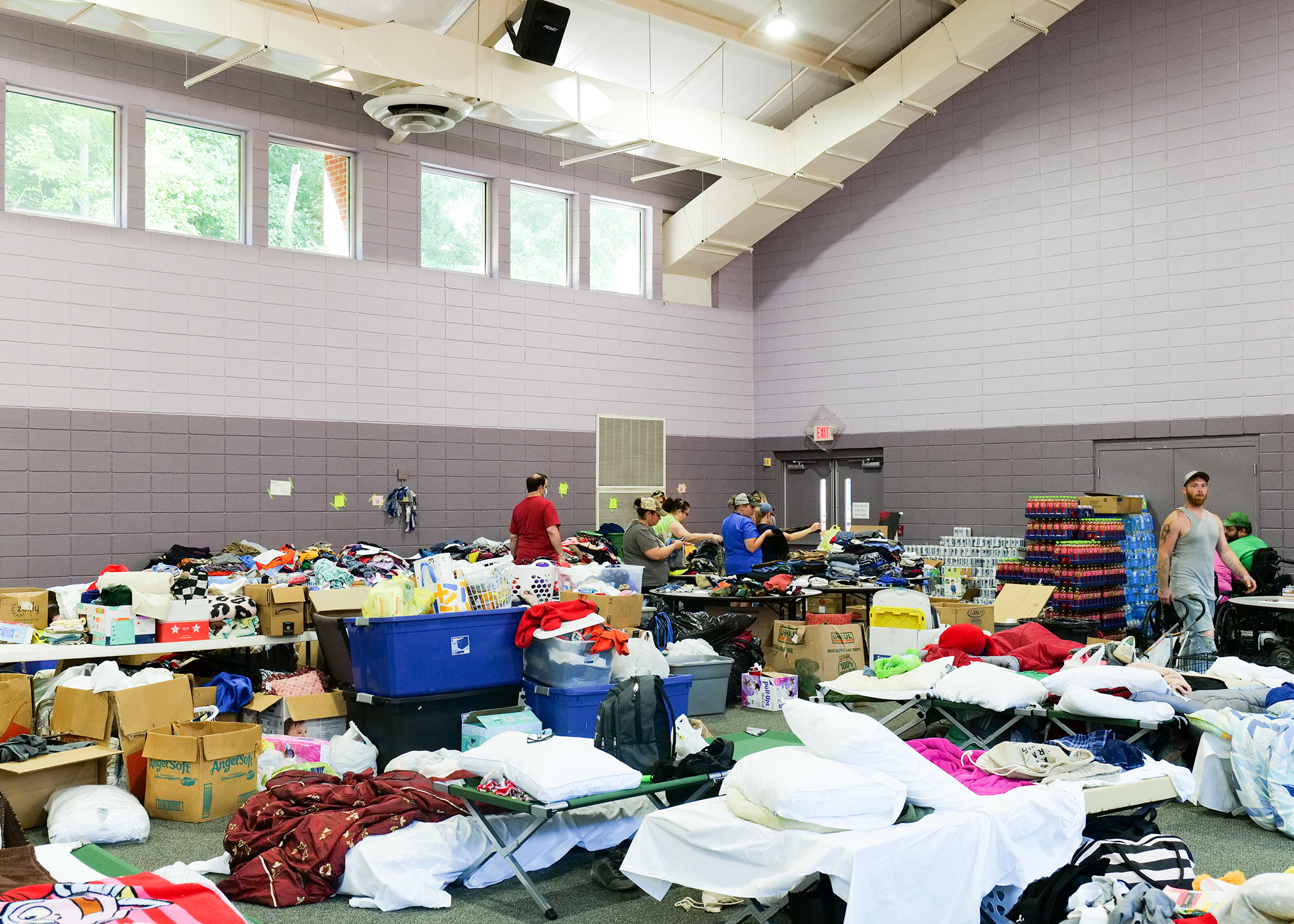 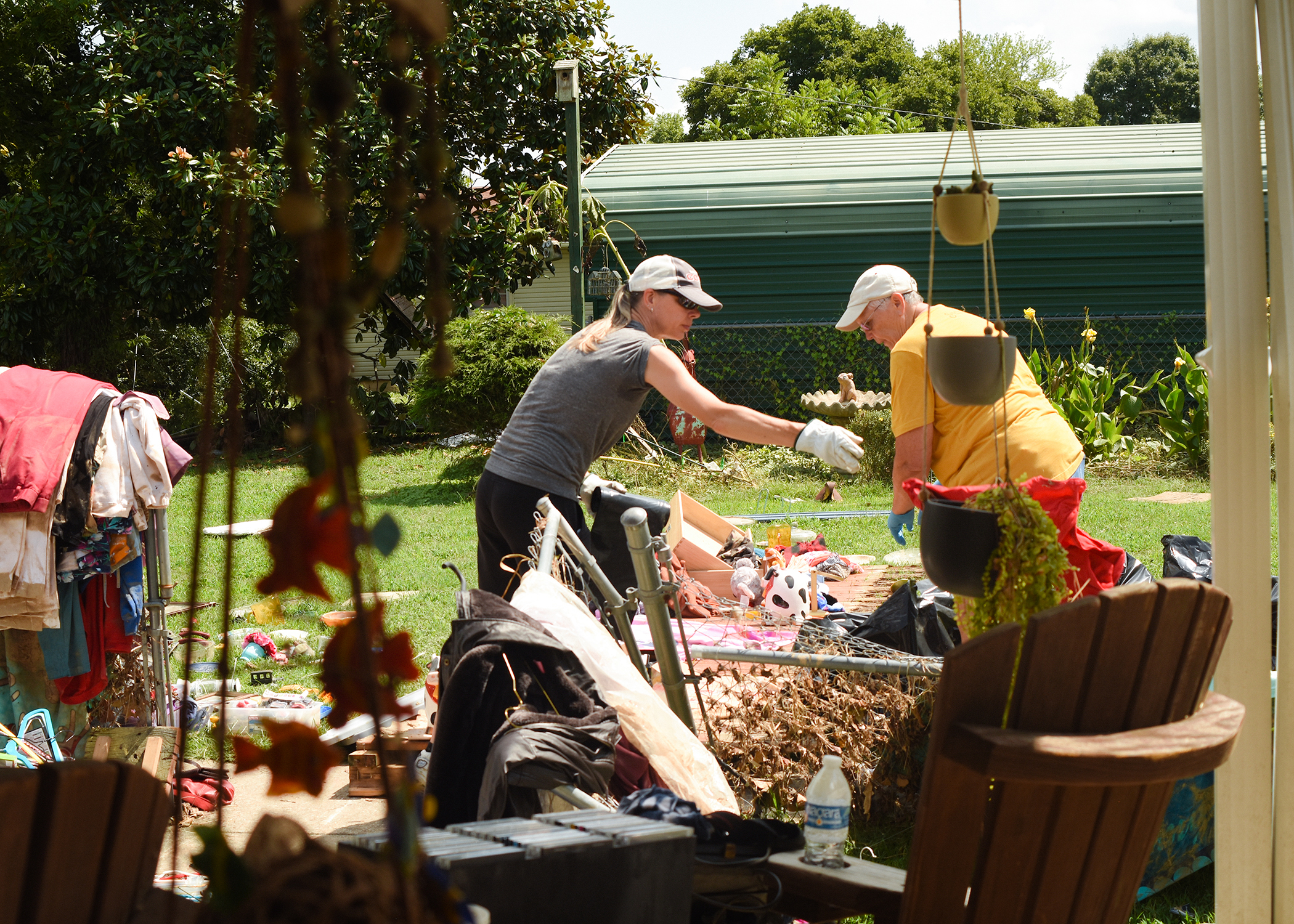 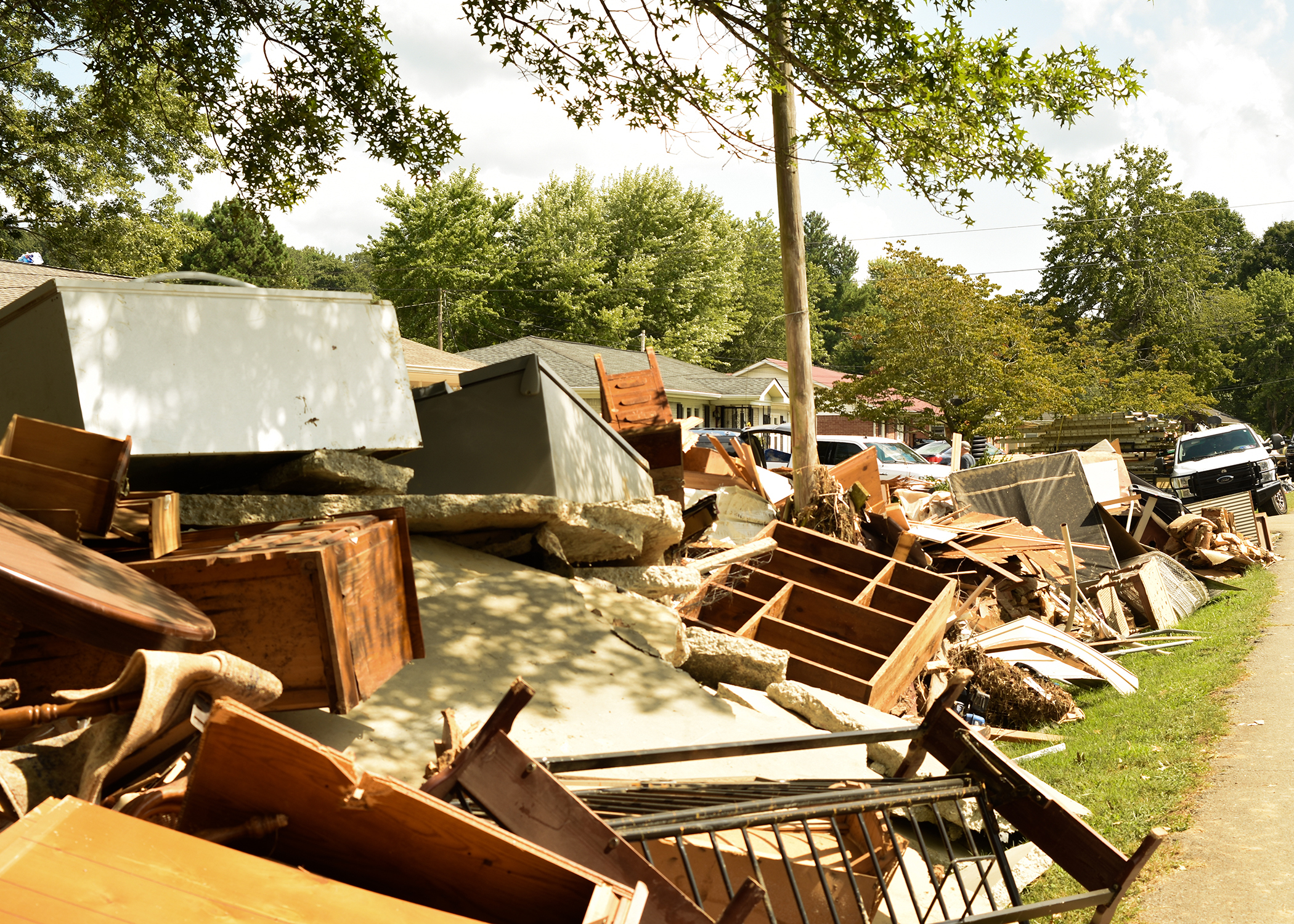 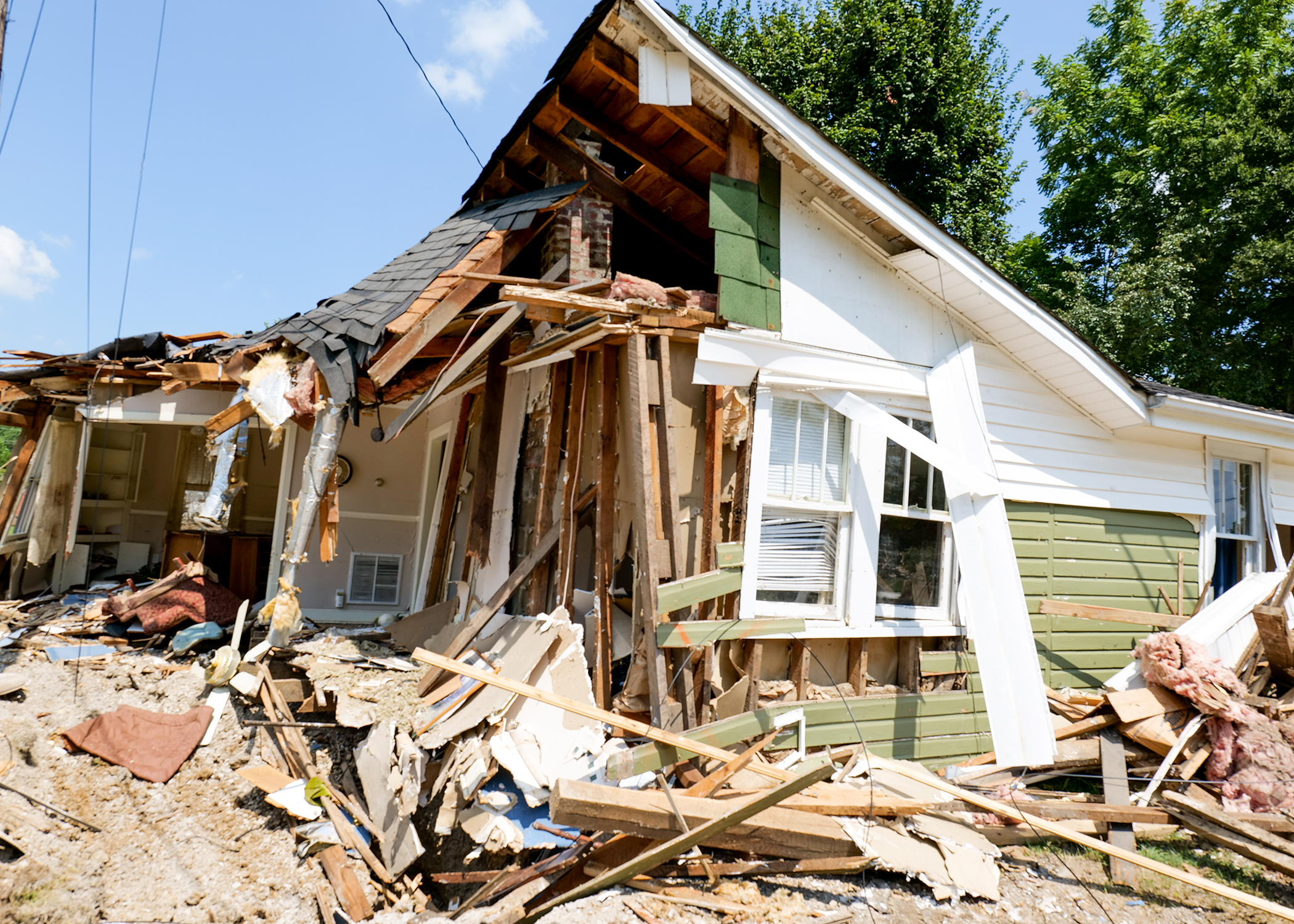 If you’re looking for a disaster recovery hub in Waverly, stop by the Waverly Church of Christ on West Main Street.

Unless you’re a regular visitor, the first person to greet you at the church may well be secretary-receptionist Debbie Harden, who says she was the last baby born at a now-shuttered small clinic in Waverly 60 years ago. It’s the beginnings of another hot and sticky August day, and she walks the cool concrete floors of the church’s basement offices in bare feet, as is her custom for much of the year.

Asked if some sense of normalcy has returned to her small hometown after the August 2021 flood, Warden takes a moment and replies, thoughtfully, as if she were speaking for much of the town:

“Yes and no. It was a lifetime ago … and it was yesterday.”

It’s the start of another busy day at the church. Amy Fair, Vice President of Donor Services at The Community Foundation, is to meet with a few families who want to learn how they can access additional assistance for flood recovery from the Humphreys County Long Term Recovery group, which she co-chairs with Nioka Curtis of United Way of Humphreys County. Amanda Hite of the Humphreys County Emergency Management Agency, an important resource for Fair and Curtis, was also on hand at the church.

After lunch at the church with Hite and others, Fair later will drop off a check to Richard Rye, Humphreys County Director of Schools, to support the hiring of an additional social and emotional learning liaison for next two years to help deal with students who have experience added anxiety, stress, and depression since the flood a year ago.

Rye reports there have been more than three times the typical referrals in a school year for stress-related issues in the four months post-flood. School enrollment is also down by 150 or so students since last spring, as families have moved away after the flood.

Fair says she has lost track of the number of her trips to Waverly for meetings and grantmaking preparation and information-gathering in the past year. It’s definitely in the double digits. 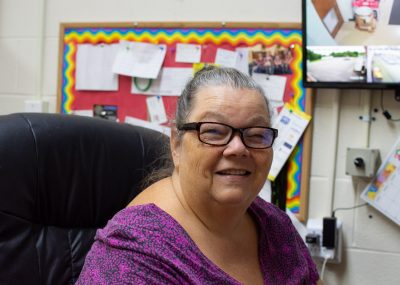 (Pictured: Secretary-receptionist Debbie Harden of Waverly Church of Christ was born and raised in Waverly and has lived through several disasters. “This by far was the worst,” she says of the August 2021 flood.)

“The Community Foundation of Middle Tennessee has provided financial support for flood recovery in Humphreys County in 2010, 2019, and 2021,” Fair said. “We would do it again, without question, for this county that has been part of the 40 counties in Tennessee we cover since our beginning. It’s who we are.

“We intentionally invested more than money in support of the August 2021 flood,” Fair continued. “With experience and knowledge gained from previous disasters, we felt dedicating the time and effort to build relationships and share this knowledge through the Humphreys County Long Term Recovery Group would contribute to the progress and success of the efforts.”

Fair is joined in the interview with flood survivors by a crew from a Nashville TV station, which has been following the Waverly flood and is preparing an updated story to coincide with the one-year anniversary. Also, part of the interviewing process this morning is Heather Marriott, a disaster case supervisor with the Tennessee Western Kentucky Conference of the United Methodist Church and its United Methodist Committee on Relief (UMCOR), and a major player in the region’s disaster relief and recovery efforts.

Flood recovery “has been a hard learning experience for a lot of people here,” said Hite, who includes herself in the statement.

Hite and her family lost a home to the floodwaters. She explained that floods generally aren’t covered by insurance, and the process of obtaining flood insurance for a homeowner can be a series of dead ends and runarounds.

“There were just 117 flood insurances policies in the entire city when the flood hit,” she said.

Figure in the shortage of rental housing, a building supply chain shortage and the lack of specialized workers such as plumbers and electricians, and “a lot of homes in town are just sitting there,“ Hite said. For many residents, “It’s still a grim situation.” 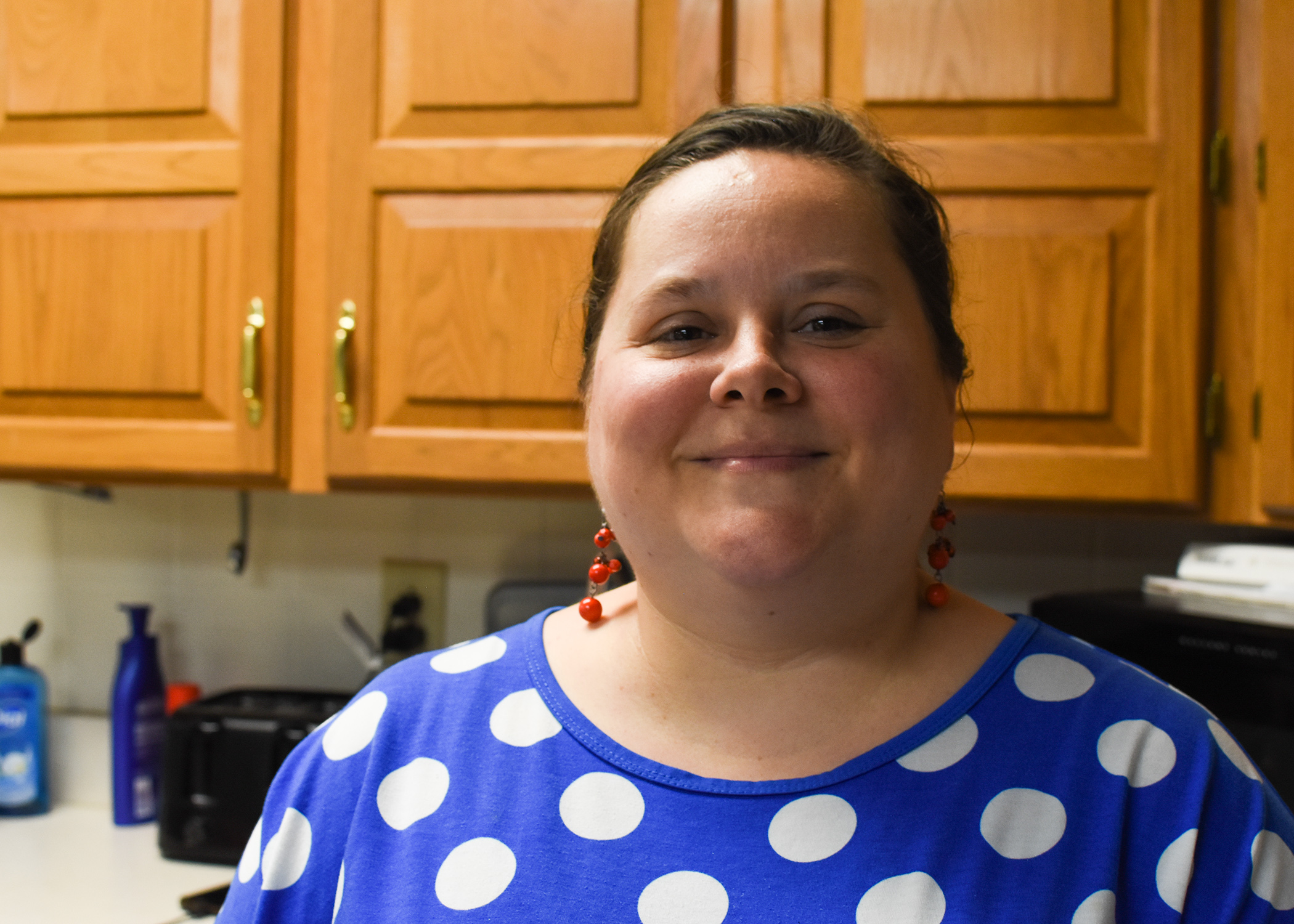 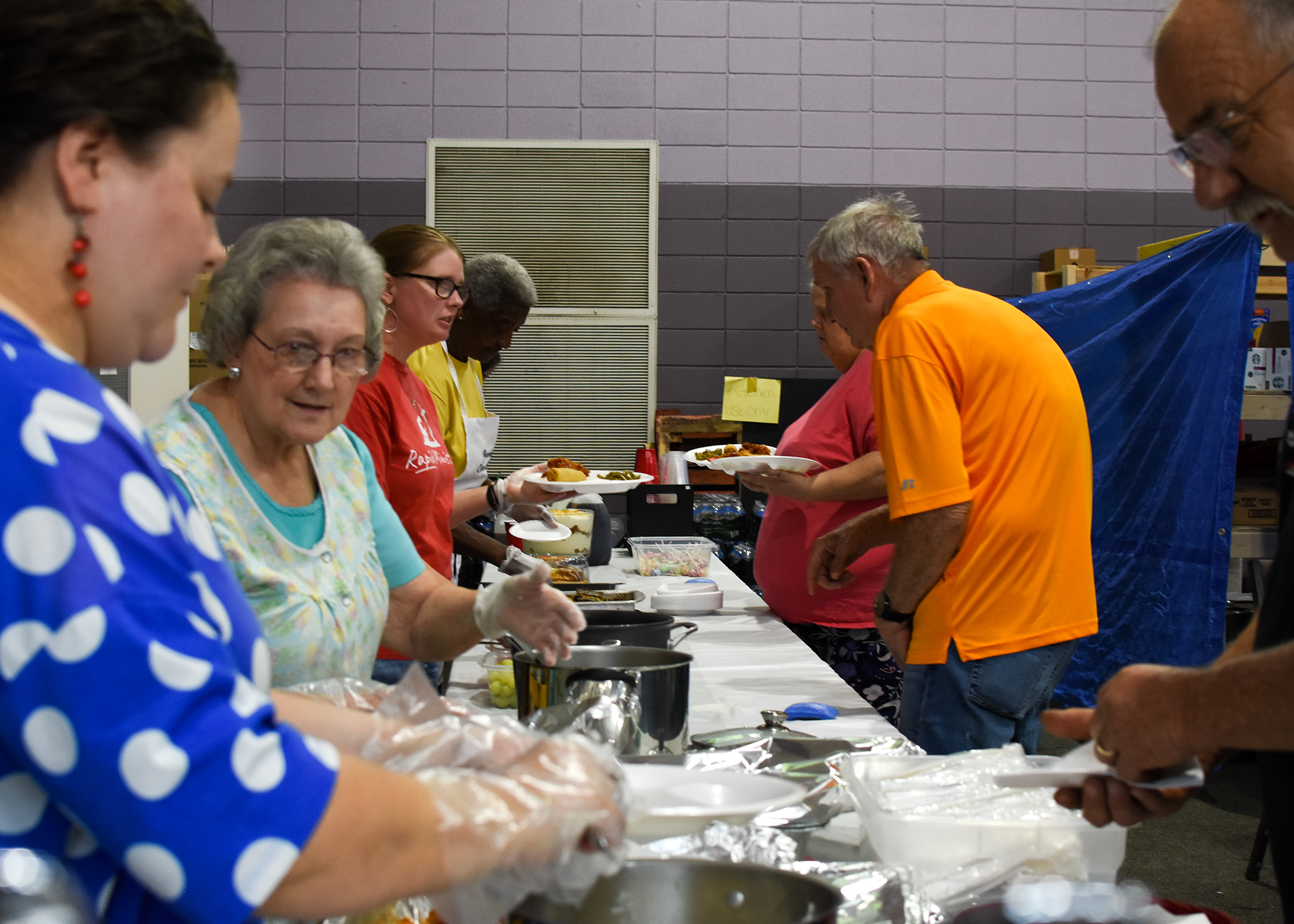 (Pictured: Kayla Mashburn directs the kitchen at Waverly Church of Christ, which still serves volunteers, workers and anyone else who needs breakfast, lunch and dinner every weekday nearly a year after the August 2021 flood.)

Disaster recovery has been a personal quest for the Waverly Church of Christ. Among the flood’s fatalities was 16-year-old church member Nathanal Whitsett. Several of the church members’ homes flooded.

The 200-member church sheltered scores of families in its adjoining activity center — a combination gymnasium, kitchen and community meeting space — and until recently served as a distribution spot for household essentials such as toiletries and cleaning supplies. The kitchen served breakfast, lunch and supper seven days a week for many months and still serves three square meals each Monday through Friday under the director of kitchen manager Kayla Mashburn, whose husband, Kyle, is the church’s youth minister.

There’s an open invitation to dine to anyone who needs a free meal, including the scores of volunteers and workers who continue in recovery efforts. It’s estimated that the church has served more than 100,000 meals during the past year — 600-800 a day at its peak — with numbers now averaging about 40 each for breakfast and lunch and about 30 for supper.

“It takes a lot of men and women to work it,” said Mashburn, whose cooking and serving staff consists mainly of volunteers. “It’s awesome how everything has played out.”

Among Waverly Church of Christ’s supper guests this week are Rex Miller and his crew of workers. Miller is a Dayton, Ohio-based construction project leader for Brethren Disaster Ministries of New Windsor, Maryland, which partners with volunteers and supporter to serve communities recovering from disaster.

In his mid-70s and still fit, trim and decisive — right out of handyman central casting — Miller and his workers are putting the finishing touches on a badly damaged, one-story home a mile or so down the road on East Main Street.

The grass adjoining the street appears flattened and discolored, as if still bruised by the floodwaters, in this part of Waverly. Miller expresses thanks to the multifaceted efforts of workers continuing the rebuilding process in the town, which he knows by long experience will take months and years to complete.

While in town he’s staying at the Cumberland Presbyterian Church on Church Street, another recovery hub for what has been a flock of disaster angels arriving as recovery continues. 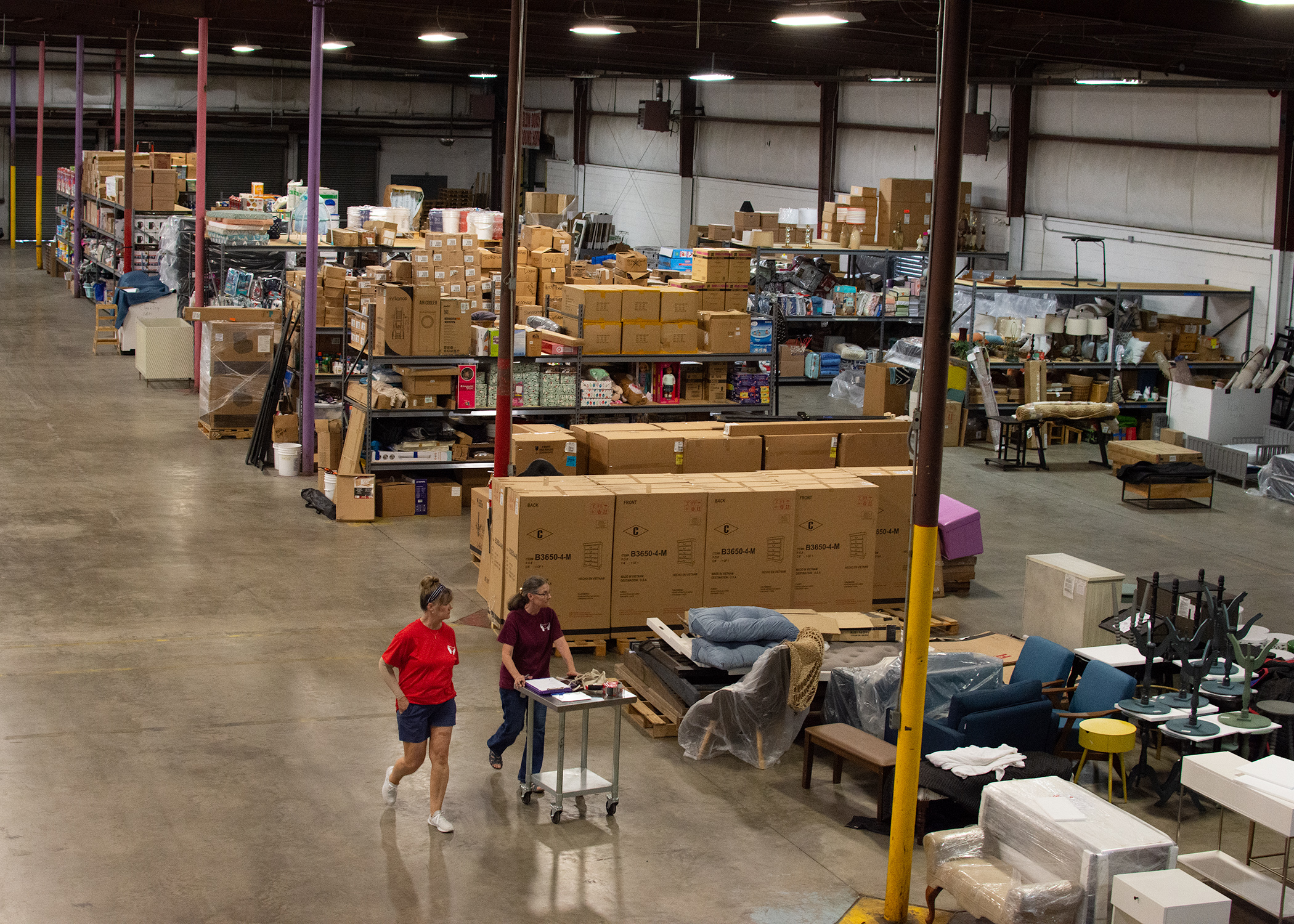 (Pictured: Tennsco warehouse shelves are packed with donated cleaning essentials and other household goods, for use by area nonprofits and other organizations during flood relief and recovery.)

Just north of downtown Waverly on Airport Drive sits an expansive warehouse complex, owned by Dickson, Tennessee-based Tennsco Corp., and managed by Van Malone, a Waverly native and former junior high coach who is the company’s Senior Vice President of Manufacturing. Since the flood a year ago the warehouse has been filled with furniture, floor coverings, big and small appliances, toiletries and other essentials for disaster recovery.

Not to mention the 32 tractor-trailer loads of sheetrock donated to the rebuilding efforts and consuming a major swath of the warehouse floor.

The Northport, Alabama-based nonprofit High Socks for Hope, which focuses on helping families move into furnished homes after natural disasters across the country, is among the organizations that have been using the warehouse free of charge courtesy of Tennsco.

“Our president, Stuart Speyer, is committed to helping the community in times of need,” said Malone. This indeed remains a time of need, as evidenced by the rows upon rows of beds, refrigerators, bathroom vanities and shelves stacked high with cleaning supplies.

“Everyone jokingly says that this place looks like Costco and Lowe’s had a baby,” he said with a smile.

Nearly a year after “this last flood’” as Malone references it, “You kind of feel a sense of normalcy. At least normalcy to you and your world.

“But, when you think about it, it’s amazing the amount of stuff that’s been done, given the supply chain issues,” he said. “It’s been quite a year.”

Among our lunch table companions at Waverly Church of Christ is Bill Lowe, Disaster Relief director at Trace Creek Baptist Church in nearby New Johnsonville, which also is in Humphreys County.

Lowe praises the efforts of the many volunteers and other workers, particularly singling out the transportation road crews that have been tasked with opening and maintaining the many roadways affected by the flood.

“For the first time in a long time, I drove into town this morning and didn’t smell mold,” Lowe said. Then, as we prepare to leave lunch for the next interview, he stands and offers his business card.

Story by Pat Embry and photographs by Morgan Yingling of The Community Foundation of Middle Tennessee.

Each week, a group of churches, civic organizations and nonprofits — some locally based and others not — come together as a committee of the Humphreys County Long Term Recovery Group (LTRG) to review unmet needs related to home repair and rebuild from the August 2021 flood.

Together, they share in the financial investment and the show of collective support for flood survivors. This group has allocated $2.5 million across 33 homes and awaits many more homes to support with funds remaining.

The group consists of:

Note: This list represents the efforts of the LTRG and is not exhaustive of all the groups who remain in the community bringing both money and volunteers to work on rebuild efforts.