A Year After Tornadoes Strike, Much Progress, More to Do

What took mere minutes to crush buildings and shatter lives has taken many months to mend.

This week marks one year since a series of late-night and early morning tornadoes swept through Tennessee, leaving behind a path of death and destruction. Many survivors face a continued long road to recovery.

The Community Foundation of Middle Tennessee (CFMT) has released a one-year report to the community that summarizes and details the progress of its Middle Tennessee Emergency Response Fund, activated by CFMT just hours after the tornadoes touched down in the late-night and early morning hours of March 2 and 3. 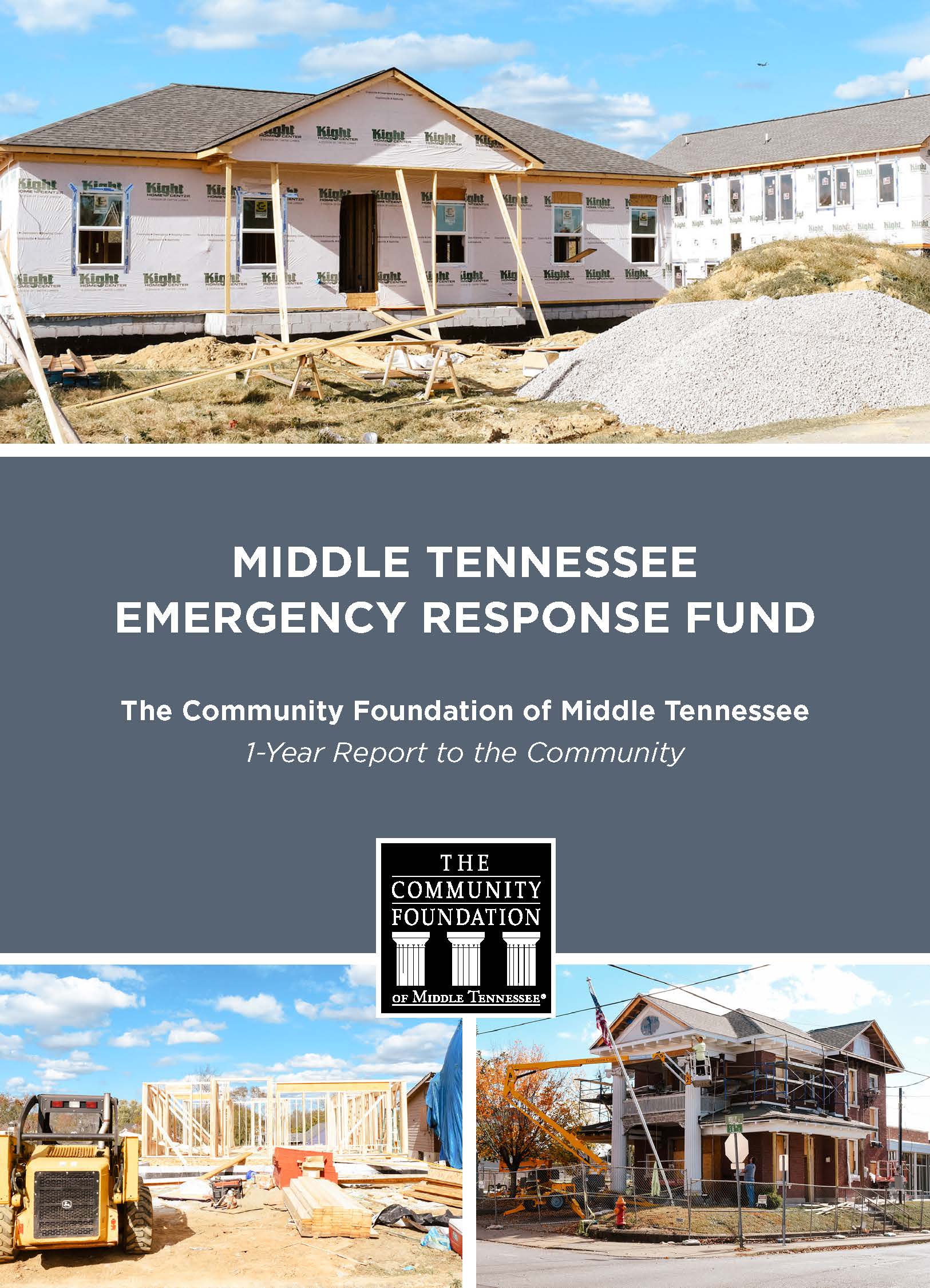 Twenty-five people died — 19 of them in Putnam County, including five children — and more than 300 people were injured in the series of tornadoes that touched down from West Tennessee through northern Davidson County, North Nashville, East Nashville, Mt. Juliet and Lebanon in Wilson County and to Cookeville and Putnam County.

To add disaster on disaster, the ongoing worldwide COVID-19 coronavirus pandemic set in just days later, resulting in the loss of more than 500,000 lives to date just in the United States, amid continuing economic turmoil and unemployment figures not seen since the Great Depression.

Despite everything, Middle Tennessee and beyond has remained generous with their charitable contributions. Volunteers continue to show up daily and put in hours after hours of their time and effort to benefit nonprofits, churches and schools.

CFMT has raised more than $12.5 million ($12,501,239.21) in the Middle Tennessee Emergency Response Fund from more than 22,000 donors representing all 50 states and 35 foreign countries, from Australia to the United Arab Emirates.

Thus far, the Fund has distributed $6,354,408 in the form of 162 grants made to 108 Davidson, Wilson, and Putnam County organizations. Another $1,353,259 has been pre-approved for repair and rebuild efforts in Davidson County.

Grants by county supported include:

Grants by area of support include:

Grantmaking has included input from both the Middle Tennessee Emergency Response Fund Advisory Committee and CFMT board members. Members of the Fund’s advisory committee include city and civic leaders from communities throughout Nashville and areas of Middle Tennessee affected by the tornadoes.

The recovery would not be possible without the direct service of 108 nonprofit organizations and churches that have received funding.

“Although the impact on our community is far-reaching, we have been encouraged in the face of this overwhelming tragedy to see so many people and organizations working together to help hundreds of residents affected by the storm,” said John Bell, Executive Director of the Cookeville Regional Charitable Foundation.

Early on, the relief work was spent on the bare necessities of life: food, clothing, toiletries, and shelter. This work has continued as funding has shifted toward rebuilding efforts.

Brandon Shaw, Grant Manager, Second Harvest Food Bank of Middle Tennessee, reports that the agency’s collective tornado and COVID-19 relief efforts has resulted in 39% more food being distributed between March 1–December 31, 2020 when compared with the same period in 2019. Cumulatively, Second Harvest provided 35.8 million meals in the 10 months following the tornadoes.

“Since March, our program staff, volunteers, drivers, material handlers, fundraisers, and community partners have been working tirelessly to care for our community,” Shaw said. “The response has been overwhelming already, as people have given of themselves to help. But there is much more to do, especially now that a global pandemic has been brought to our doorstep.”

While much work remains, progress has been significant. Examples include:

As to what work remains, “The biggest struggle has been, and continues to be, helping those in need of affordable housing,” said Eileen Lowery, Director of UMCOR’s Tornado Recovery Connection.

“There are survivors who were living with friends and family members prior to the tornado. Those friends and family members then moved away from the area after the tornado, which then created situations of survivors going from being unhoused to homeless,” Lowery continued. “Others lost their affordable housing to not being able to find rental options within their financial means. Others relied on having housing near a bus route to be able to get to work, to only now not be able to find housing options near a bus route.

“It has been a blessing to walk along survivors while working with community partners who are enthusiastically responsive in helping survivors and the community rebuild stronger than everyone was before,” she said. “We are humbled by survivors’ extraordinary strength and recovery, while being a small part of a community serving those in need.”

In Davidson County, repairing and rebuilding homes is being coordinated by Westminster Home Connection, which has been involved in the coordination of 50 construction referrals, with about 30 of those in the repair pipeline.

Joining Westminster Home Connection as part of the construction committee completing the work are: Armstrong Real Estate Foundation; Nazarene Disaster Relief, MidSouth District; Project Connect; Rebuilding Together Nashville; and Successful Survivors (Greater Heights Missionary Baptist Church). Each home being repair/rebuild is provided with an average $7,500 from the Middle Tennessee Emergency Response Fund to complete the work. Other funds may come from the construction groups.

Keith Branson, Executive Director of Westminster Home Connection, said homes that needed community assistance for repairs fall into three categories. “No. 1, Underinsured: The home was insured, but the policy didn’t cover some of the work needed to bring the home to a safe and functional condition,” Branson said. “For example, insurance might not cover tornado damage attributed to an underlying condition, such as termite damage. In that case, the survivor would have a shortfall in their ability to repair the home.

“No. 2, Contractor Issues. Contractors did shoddy work or even disappeared with deposits without doing any work at all,” Branson continued. “Another contractor issue is pricing. Construction is booming in Middle Tennessee, and contractor prices have risen significantly since March 2020.

“No. 3, Uninsured. Some homes were uninsured because the home had been in the family for many years and didn’t have a mortgage, the survivor had limited income, etc.,” Branson said, adding that, “Some survivors did not qualify for assistance with home repairs because they decided to sell instead of repairing the home.”

Said Eddie Latimer, CEO of Affordable Housing Resources: “The biggest issue to me was COVID falling on top of our strong tornado response. We were off to a good start when all life changed from COVID.

“This has caused recovery to appear to be sloppy, chaotic, even minimal,’ Latimer continued, “but with a good eye, one can see recovery has been consistent and undaunted as it worked its way through two natural disasters.

“We still are in some recovery,” he said, “but what has occurred has been heroic as you consider all the chaos created by COVID.”

Where to Go for Assistance, Unmet Needs

As with any community facing disaster, deeper into the recovery process, unmet needs surface for tornado survivors.

In some cases, after a variety of resources are tapped — which may include benevolence committee funds, FEMA, insurance, SBA loans, nonprofit funds, and a tornado survivor’s personal finances — there remains a financial need for a full recovery.

When this occurs, Disaster Case Managers make a presentation to funders that have indicated they have financial resources to contribute to unmet needs.

For Middle Tennessee, review of cases by the Unmet Need Funding Table began just after Thanksgiving, 2020. These cases are presented free of confidential detail in a blind review process that provides information about available financial resources and why tornado survivors are unable to recover on their own.

In reviewing the unmet needs cases, the process maintains the same collaborative spirit of many other aspects of recovery. Everyone pitches in. This allows the funders to be part of fulfilling several unmet needs, and it also provides a tornado survivor with the knowledge that there are many in the community committed to their recovery.

Organizations that have funds available and are invited to the unmet needs allocation meetings in Davidson, Wilson, and Putnam counties are: 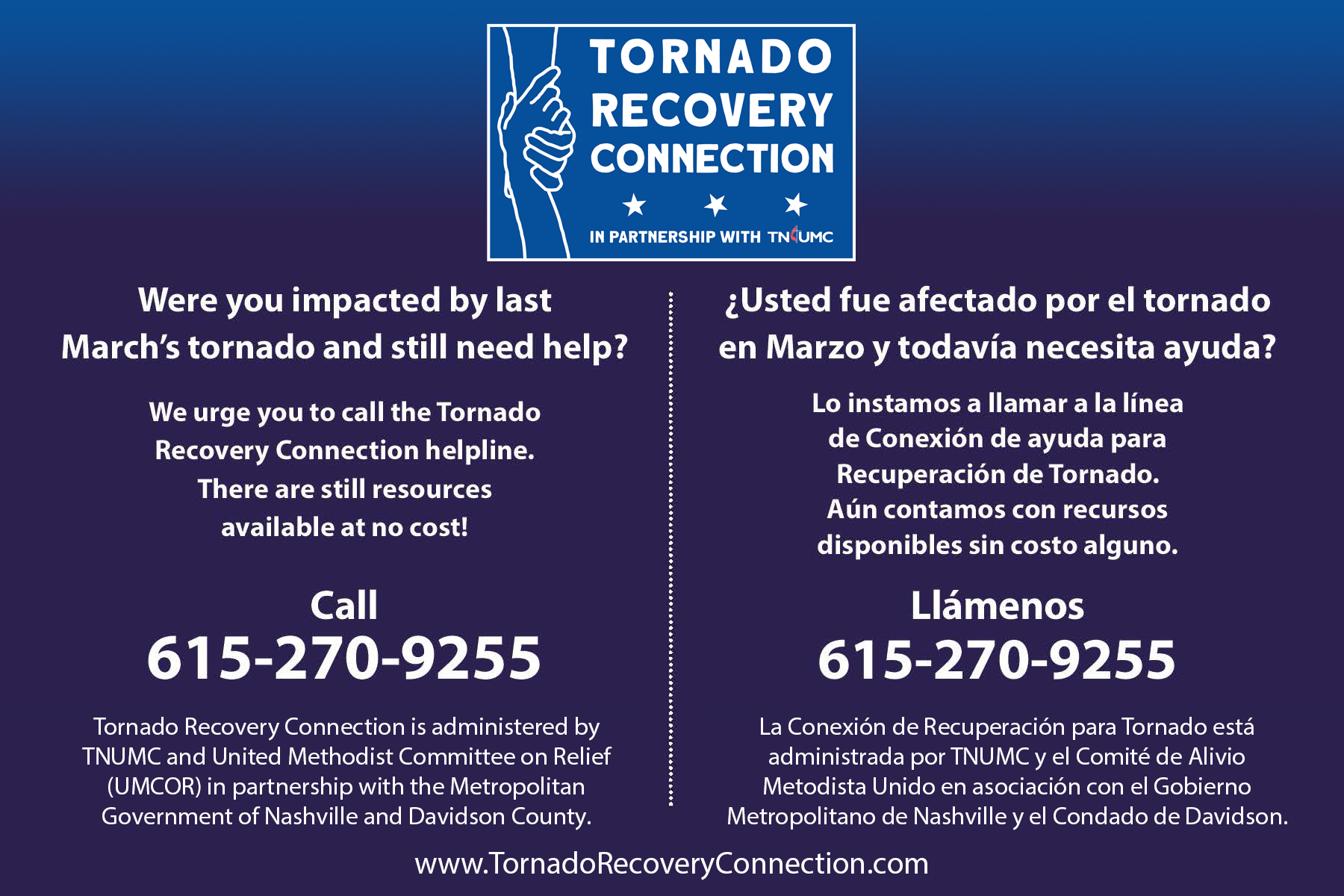 In addition to homeowners, there were many renters impacted by the tornado, including those immediately impacted by the storm and those displaced later after landlords decided to sell their tornado-impacted rentals.

This has been a great concern for the city and the nonprofits providing assistance in disaster. Many organizations have provided short-term and long-term rental support for tornado survivors, including (but not limited to): Affordable Housing Resources; American Red Cross of Nashville Area; Broken Restored Redeemed Ministries; Catholic Charities of Tennessee; Gideon’s Army; The Equity Alliance; The Hope Station; Martha O’Bryan Center; Needlink; Project Connect Nashville; Rooftop Foundation; and Salvation Army – Nashville Area Command.

Also, the Davidson Co. Long Term Recovery Group has canvassed the neighborhoods several times and sent direct mail pieces and analyzed data to find survivor households. It remains actively searching for tornado survivors who are still in need of assistance. You can connect through the Tornado Recovery Connection helpline at 615-270-9255. 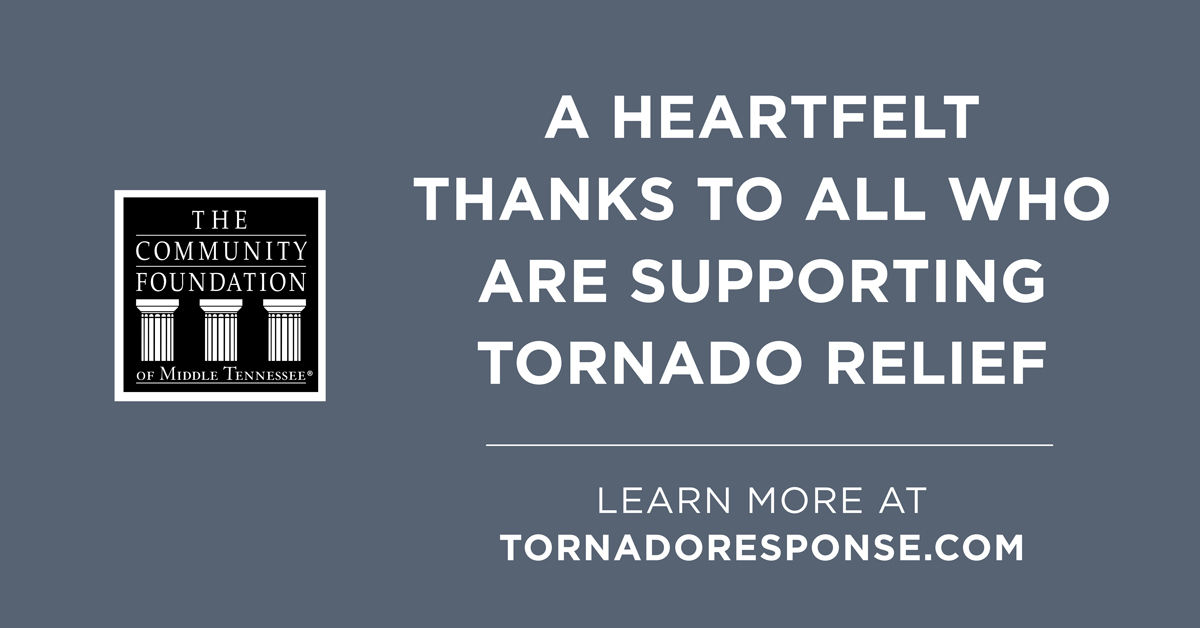 The Community Foundation exists to promote and facilitate giving in the 40 counties of Middle Tennessee and beyond. It does this by accepting gifts of any size from anyone at any time and by empowering individuals, families, companies, nonprofits, and communities to respond to needs and opportunities that matter. The Community Foundation works with people who have great hearts, whether or not they have great wealth, to craft solutions that reflect the intentions and goals of their charitable endeavors. For more information, call 615-321-4939