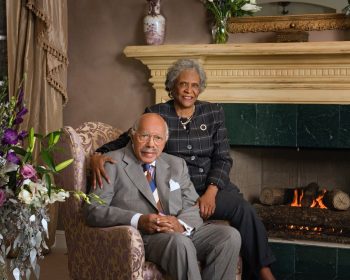 When Robert Churchwell, Sr., was hired to the staff of The Nashville Banner in 1950, he became one of the first African Americans to work as a full-time reporter at an established daily Southern newspaper. Though Robert’s presence at the paper initially brought much opposition – including being barred from editorial meetings and writing stories in his dining room – he persevered and became an esteemed reporter in the area. After 31 years at The Banner, Robert retired in 1981 and then spent more than two decades as an editorial writer at the R.H. Boyd Publishing House. Along with breaking barriers, Robert earned the respect of his peers, honoring him with numerous awards, including the Helen Thomas Award for Lifetime Achievement from the Society of Professional Journalist.

Mary Elizabeth Buckingham Churchwell was aspirational to hundreds of Middle Tennessee students having taught in the Nashville Public Schools for thirty years. She lived for 89 wonderful years as a women of faith, devoted wife, proud mother of five, and “fun” grandmother/great–grandmother of thirteen. As an AWARD-WINNING teacher who had a love for teaching children to read, like her husband, Robert Churchwell, Sr., she valued education.

The Churchwell’s life together spanned more than 70 years.  Their passions of education and journalism are exemplified in this scholarship named in their honor, which will continue Robert’s core values of the profession by showing the importance of journalists being representative of the communities they serve, as well as his belief that regardless of race, gender and generation, it is important everyone participates in the profession.

Eligibility: This scholarship will benefit juniors, seniors, graduate or PhD. candidates in the field of journalism who are committed to a career in the profession. Students must compose an essay on “The Role of Professional Journalism in Today’s Society” and provide samples of journalistic work. Applicants must also have at least a 3.0 GPA or better, qualify for financial aid, and share their extracurricular and community service activities. Recipients of this scholarship may reapply for support for one additional year.

To donate by check, make it out to The Community Foundation of Middle Tennessee and note the Robert Sr. and Mary Churchwell Scholarship Fund name in the memo line.