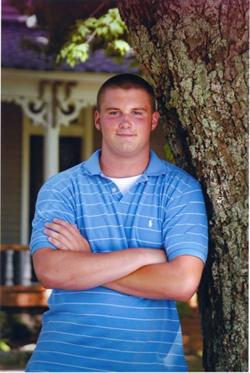 Eligibility: Those eligible to apply are graduating seniors from Brentwood Academy with a minimum weighted GPA of 3.5 or higher, and an ACT score of 24 or higher. Applicants must have earned a varsity letter in any sport during their Junior or Senior year. Anyone receiving a full collegiate athletic scholarship grant in aid will not be eligible. Other criteria considered should be a demonstrated love of school, team spirit over self-interest, good moral character, and a heart for others. Financial need will be a criterion but not the ultimate factor. The recipient must sign a pledge to not use any hand-held devices, including a cell phone, while driving. The Scholarship may be used at any accredited four-year college or university, starting the academic year immediately following high school graduation, and students may reapply for renewal for three additional years, provided the applicant maintains at least a 3.0 GPA each year. Renewals will not be automatic or guaranteed.

Brian Ralls graduated from Brentwood Academy in 2005 and matriculated at the University of Florida, where he graduated with a B.A. in economics in 2009. While at Brentwood Academy, Brian was a member of the National Honor Society, the Spanish National Honor Society, two state championship basketball teams, three state championship track and field teams, and he played in three straight state football championship games. In addition, Brian was the individual state champion in the discus throw in 2005. On October 28, 2009, Brian was tragically struck and killed by a driver distracted on a cell phone. This Fund was established by Brian’s family and friends to honor his memory and his love for Brentwood Academy, which enabled him to learn who he was and to learn who HE is.